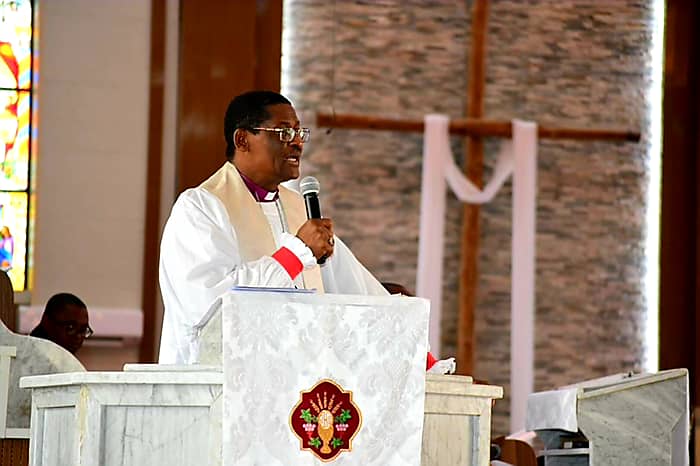 Interfaith Diversity Network of West Africa welcomes the Archbishop of Canterbury statement calling the Nigerian Anglican Primate to order over his used of unchristian and uncharitable words to describe homosexual people. (See below)

The statements made by the Nigeria primate, Most Reverend Henry C Ndukuba, is totally unacceptable and should be denounced by all bishops of the Anglican communion. The statement goes on to use phrases like, “[homosexuality] is likened to a Yeast that should be urgently and radically expunged and excised lest it affects the whole dough.” It also states that “secular governments are adopting aggressive campaign for global homosexual culture.” (sic)

The Archbishop, Metropolitan and Primate of All Nigeria, the Most Reverend Henry C Ndukuba, issued a statement on Friday 26 February 2021 which referred to “the deadly ‘virus’ of homosexuality”. The statement goes on to use phrases like, “[homosexuality] is likened to a Yeast that should be urgently and radically expunged and excised lest it affects the whole dough”. It also states that “secular governments are adopting aggressive campaign for global homosexual culture.” (sic)

I completely disagree with and condemn this language. It is unacceptable.It dehumanises those human beings of whom the statement speaks.

I have written privately to His Grace The Archbishop to make clear that this language is incompatible with the agreed teaching of the Anglican Communion (expressed most clearly, albeit in unsuitable language for today, in paragraphs c and d of resolution I.10 of the Lambeth Conference 1998). This resolution both restated a traditional view of Christian marriage and was clear in its condemnation of homophobic actions or words. It affirmed that “all baptised, believing and faithful persons, regardless of sexual orientation, are full members of the Body of Christ.”

The Anglican Communion continues to seek to walk together amidst much difference and through many struggles. I urge all Christians to join me in continuing prayer for the people and churches of Nigeria as they face economic hardship, terrorist attacks, religious-based violence and insecurity.

The mission of the church is the same in every culture and country: to demonstrate, through its actions and words, that God’s offer of unconditional love to every human being through Jesus Christ calls us to holiness and hope.

We would like to thank you for your response to the statement that Interfaith Diversity Network of West Africa (IDNOWA) published on February 20, 2021. We really appreciate that you no longer speak of a crusade against LGBTQI people (and their organisations) who have established an office from which they can work for the recognition of human rights for LGBTQI people in Ghana. You made an important contribution to calm down the heated atmosphere.

We welcome that you have emphasized in radio interviews, that lesbian, gay, bisexual, trans, queer and intersex people must be treated with respect and must not be discriminated against in the spheres of work and housing. This means a lot to us as our LGBTQI community is often confronted with exactly these problems.

However, we think that the Roman Catholic Church could do more, especially when it comes to providing health care and education. We face time and time again, pupils or those that are ill being refused help when he or she is identified or labelled as a gay, lesbian or trans person. You said that “[p]eople with homosexual inclinations are subjects of the Church’s pastoral care as anybody else is in the Church and outside of it.” We strongly welcome this. It would be a major improvement for our community members if Catholic hospitals and schools declared explicitly not to exclude LGBTQI people from their services.

Please, allow us to quote in addition the “Postsynodal Apostolic Exhortation Amoris laetitia” (Nr. 250) to strengthen this point and to expand it to families: “The Church makes her own the attitude of the Lord Jesus, who offers his boundless love to each person without exception. During the Synod, we discussed the situation of families whose members include persons who experience same-sex attraction, a situation not easy either for parents or for children. We would like before all else to reaffirm that every person, regardless of sexual orientation, ought to be respected in his or her dignity and treated with consideration, while ‘every sign of unjust discrimination’ is to be carefully avoided, particularly any form of aggression and violence. Such families should be given respectful pastoral guidance.”

We would like to highlight the many words and deeds of Pope Francis by which he personally has given pastoral support to families with lesbian and gay children as well as to gay, lesbian and trans persons themselves. We think that his approach to meet personally with members of our community, to listen to our stories and to comfort us should be considered as a role model for every pastor of the Catholic Church, including in Ghana.

Having said this, we must admit that we do hold some dissenting views on the morality or immorality of the sexual expression of love between people of the same gender.

It would mean everything to us, if the Catholic Church in Ghana could become a partner who accompanies and support us on this path towards true moral integrity. Therefore, we would be delighted for the opportunity to meet with you in person and to share with you, in the spirit of dialogue, our experiences as LGBTQI people in Ghana. To start a conversation on how pastoral care for families with LGBTQI members could be put into place and become meaningful.