The World Congress of Families (WCF), designated as a hate group by the Southern Poverty Law Center, announced last week that a regional conference would be held on October 31 and November 1 in Accra, Ghana, marking an expansion of its right-wing fundamentalist agenda in West Africa.

Formed in Russia in 1997 by American right-wing thinkers and Russian counterparts, the World Congress of Families is one of the major driving forces of the global promotion of an anti-choice and anti-LGBTIQ agenda. Using pseudo-human rights language about the rights of the family, the child, and freedom of religion, WCF promotes conservative ideologies centered around concepts of “natural law” and “natural family” through laws criminalizing LGBTIQ people and sexual and reproductive health and rights, in particular abortion, both at a national and international level.

“It is extremely concerning to see the group expand its interest in West-Africa; its presence will undoubtedly increase social stigma and discrimination against LGBTIQ people, especially those living with HIV/AIDS. Same-sex relations are still criminalized in the majority of the region, violence, and harassment of LGBTIQ people are ripe, so LGBTIQ people are already living in hiding and in fear for their lives. We fear that the congress will come with an even harsher agenda, and ample resources for increasing hate against LGBTIQ people in West Africa.”

WCF is well-connected, well-resourced and influential, and has, to a greater or lesser degree, influenced the passing of barbaric laws such as the anti-homosexuality act in Uganda, the same-sex marriage prohibition act in Nigeria, and the notorious so-called gay-propaganda law in Russia.

“This is not the first instance of American Evangelicals and organizations exporting homophobia and transphobia around the world. Their agenda stands in stark contrast to basic human rights standards, instead openly inciting attacks on human dignity, and promoting a long out-dated world of religious domination and stark gender inequalities. We have to work across civil society and state boundaries to support activists in West Africa and ensure that an already hostile environment for LGBTIQ people and women does not become even more so.”

The congress brings together participants from right-wing civil society organizations, such as Citizen Go and Family Watch International, religious groups, as well as elected officials, religious leaders, scholars and others. It provides a platform for strategizing on further promotion of the fundamentalist agenda.

It is with sadness in our hearts that we bring to your notice the untimely death of a law abiding NigeriancitizenRABIU RABINA BAMANGA and Peer Educator at TIP for Human Rights in the FCT Abuja Nigeria who was brutally killed and buried in a shallow grave with some body parts exposed and covered with mattress at Ruga, Federal Capital Territory Abuja Nigeria.

We condemn the killing of Rabiu a law abiding citizen of Nigeria and human rights activist who until this death was contributing to ending HIV infection and supporting attainment of human rights through a non-governmental organisation. Until the issuing of this statement, we have not received any information with regards to the reason behind this gruesome murder of a law abiding citizen, whose right to life has been so annoyingly snuffed out. This is one death too many to bear! Recently we issued a statement condemning the incessant and constant harassment of innocent Nigerian youths.  The above named was contributing to securing the rights of all Nigerians and was brutally murdered and buried in a space that should be referred as safe space. This death is totallyunacceptable and unjustifiable!

This is an outrage to Interfaith Diversity Network of West Africa, a regional network of activists, faith based individuals, advocates and individual activists working for inclusion of diverse persons to create a world governed by respect and dignity.

We seek a day where all persons irrespective of religious beliefs become great allies in the quest for a safe and free society for all humans. It is therefore a slap in our faces to receive information on the cutting down of a harmless Nigerian youth who was providing service to make Nigeria a better place!

We strongly believe that humans are born free and equal and should enjoy their full human rights and achieve their full potentials in a safe and loving society irrespective of background and belief.

As a West African network, we demand that the perpetrators be identified and brought to justice and receive punishment commensurate with the crime they have committed against another Nigerian.THE KILLER(S) OF RABIURABINA BAMANGA MUST BE FOUND AND JUSTICE MUST BE SERVED!

October 7, 2018October 11, 2018 kriegerpa
IDNOWA hosted activists and experts at Capital Hills Hotel, Cape Coast Ghana  this past week (4th-7th October 2018)
The event focused on kick-starting the process of developing a curriculum for training on engaging with religious leaders in West Africa.
A special thanks to COC Netherlands,  who sponsored the event and are our partners in their Pride Project as well as our partners from the Global Interfaith Network (GIN) who facilitated the event.
Stay tuned for upcoming events! 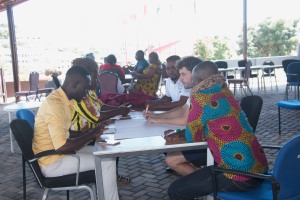 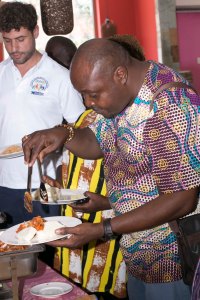 Progressive faith leaders and activists from West Africa have joined forces to work to end anti-LGBTI bias in the region and seek “a world governed by respect and dignity.”

GIN member, Davis Mac-Iyalla, third from left above, is an award winning Nigerian Anglo/Catholic gay Christian and founder/director of Interfaith Diversity Network of West Africa.  Davis is a well-known gay Christian Activist who has been an advocate for LGBTI rights for over 20 years, a public speaker, researcher and author and is often asked to speak on the plight of LGBT Christians in West Africa. He is currently based in London, UK, his second home after Nigeria, West Africa.

END_OF_DOCUMENT_TOKEN_TO_BE_REPLACED

Over 100 young persons who were arrested in Asaba, Nigeria, and alleged to be gays and lesbians are now facing homosexuality-related charges in court.

The young persons were all arrested at a birthday party last month at Delta Park Hotel in Asaba, Delta State.

A statement released by the Interfaith Diversity Network of West Africa [IDONWA], a regional network of human rights activists and faith-based individuals who have been actively working on the case, revealed that the network paid for the release of some of the arrested persons and the families of the arrested persons were made to pay substantial sums of money to bail their wards.

END_OF_DOCUMENT_TOKEN_TO_BE_REPLACED

Statement by the Interfaith Diversity Network of West Africa, issued at the 19th session of the ICASA conference, held in Côte d’Ivoire, Dec 4-9, 2017: END_OF_DOCUMENT_TOKEN_TO_BE_REPLACED

On Aug. 24, there was an introductory session for delegates to share their personal stories and outreach programs to support their fellow LGBT people. The participants who were from Benin, Nigeria, Ghana, Sierra Leone, Liberia, Gambia, Burkina Faso, Cote d’Ivoire, Mali and Togo told passionate stories of judgment, denial, shame, violence, rape, hatred and pain.